Sarah Ogawa (author of the Tomo story “One”) has been teaching English and creative writing in Japan for twenty years, while also working in journalism and television. Her aspirations to become a senior high homeroom teacher at a Japanese school were fulfilled fifteen years ago, and her students continue to inspire her every day. www.kyotosarah.com
Can you tell us a bit about your background and how you came to settle in Japan?
Though I grew up in Chicago, I was always fascinated by Japanese culture. As a child I always insisted on visiting the Japanese artifacts at the Field Museum of Natural History, or the Japanese collection at the Art Institute of Chicago. As I grew older and my parents could no longer afford my sushi habit, I got a job waitressing at a local Japanese restaurant so I could eat there after my shifts. I chose a college with a Japanese exchange program and spent my junior year in Kyoto. Although I majored in geology and always thought I’d be a scientist, after a year in graduate school I came back to Japan… and never left!
Was there anything that surprised you when you finally saw the “real” Japan?
Ironically enough, the food! Growing up in Chicago, I always loved Japanese food, but it was typical Japanese fare in America: beef teriyaki, tempura, sushi. When I finally got to Japan on an exchange scholarship, friends at my high school in Nagoya took me to their favorite hangout, a little hole-in-the-wall okonomiyaki shop. “It’s Japanese pizza!” they told me. Of course, in Chicago pizza is something holy, so I was pretty shocked to be presented with a cabbage pancake. It was the first Japanese food that was new to me, and as soon as I disassociated it from pizza, I thought it was delicious!
That shop inspired the restaurant in “One” where the characters have their first date, but there’s probably a similar okonomiyaki place in every neighborhood in Japan. I still enjoy going with my family now!
The story “One” focuses on school club culture. Can you give us a bit of background on school clubs in Japan?
Most sports at the high school level in Japan are played year-round. Students enter one club in their first year and continue it for their entire high school careers to the exclusion of any other clubs. For some students in Japan, club activities are more important than academics. Practice is often before and after school and even during lunchtime, and may last late into the evening during the season. During weekends and summer vacations, club is often held every day, and teams usually go away to training camps that push the limits of human endurance.
But clubs are not only about the sport. They are an important training ground for jyo-gei kankei, or the vertical relationship between senior and junior members of a group, the basis of social interaction in Japan. Students also learn to be reigi-tadashii, to follow the proper rules of social conduct so that they will know how to act once they enter a company or other institution.
Members of this tight-knit group form bonds that often blossom into employment and social opportunities. These people often keep in touch for the rest of their lives.
Have you studied either kendo or dance or both?
I took years of dance and did everything except ballet: modern, jazz, tap, West African…, everything and anything that was dance. At that time in Chicago and Evanston, some brilliant teachers took time to work with young people. Break dance and hip-hop were still evolving, and I saw a lot of those styles in the hallways of my high school. I picked it up by osmosis.
I never studied kendo, though I did some martial arts in college, mostly karate. The closest I’ve come to kendo is a fencing course in college, though I have been known to hit annoying people over the head with the nearest convenient object.
The story “One” deals with the cultural gap between a Japanese girl raised in America and a typical Japanese boy. How common is this scenario?
While I wouldn’t say it happens at every school in Japan, it is becoming more common. More books are dealing with these trans-boundary cultural issues, like Holly Thompson’s Orchards, for example. Japan is very much a country of merging opposites in this regard, and hopefully people are trying to find a way for the traditional culture to coexist with imported influences. While watching my daughter pull the mikoshi (portable shrine) through our neighborhood... 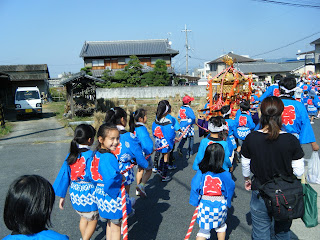 I got this view of the Golden Arches from across a rice paddy. 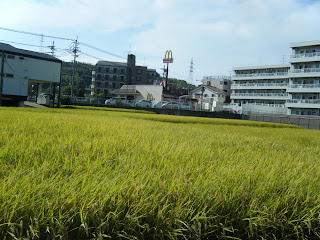 This is the reality of Japan today.
What was the inspiration or seed for this story?
Few schools have sufficient facilities for everything students want to do. The division of resources, whether funds, space, or equipment, is often a point of contention among students and faculty alike. I have worked at several schools and seen non-traditional clubs have to deal with inferior equipment and practice facilities. Happily, the school I am at now is much more fair-minded.
Do you have any message for teens in Tohoku?
Continuing something like club after such a disaster, when you’ve lost so many people and so much, may feel like betrayal. I remember the message from the high school baseball players that was read on television at the draft that year. They wrote that they couldn’t even think of baseball at such a time, even though they were top players for their age at the national level. Our hearts are with you all, and we will never forget. But doing something we love, whether it’s kendo or dance or another activity, is a celebration of life. It’s important to celebrate every day we have, not in spite of such a great loss, but precisely because of it.
Club activities also give us strength--physical, mental, and spiritual--to pull through the hard times we face. Club reminds us of the importance of teamwork and the power of the group, the strength of knowing we are part of something bigger, that we are all at the most basic level, part of “One.”
Posted by HATBOOKS Author Holly Thompson at 6:00 PM