Reviews for Tomo: Friendship Through Fiction!

Two months have passed since the birthday of the benefit anthology Tomo: Friendship Through Fiction--An Anthology of Japan Teen Stories, and the reviews have been solidly positive. Below are some review excerpts and links. Click on the link for the full review. Enjoy!


***
Reviews for Tomo: Friendship Through Fiction 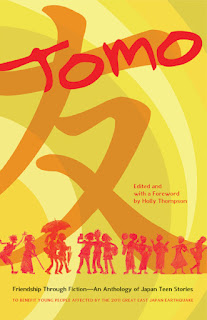 "A big but consistently engaging pro bono anthology of authors with direct or indirect Japanese 'heritage or experience.' A broadly appealing mix of the tragic and droll, comforting, disturbing, exotic and universal, with nary a clinker in the bunch." --Kirkus Reviews

"Tomo is an excellent story collection, presenting a rich and varied immersion in Japanese culture from a teen perspective." --VOYA (print only)

"With slices of Japanese language, folklore, history, popular culture, and other ethnic references, Tomo, which means friend in Japanese, offers a unique and wide-ranging taste of Japanese life." --Booklist (print only)

"The thirty-six stories. . . cover a wide range of genres (prose, verse, graphic narratives) and feature nine stories translated from the Japanese. With the exception of Graham Salisbury and Alan Gratz, most of the authors, many of whom write for adults, will be new to American teens." --The Horn Book, Out of the Box

"The stories in Tomo, "friend" in Japanese, resonate beyond the confines of tragedy in the Tohoku region to reflect a generation who will grow up indelibly marked but not defeated by 3/11...There is sadness and suicide, loss and, yes, the tsunami. But these stories equally cover everything important to the younger generation as entrance exams, ghosts, J-pop, love, divorce, baseball, gamers, ninjas and dragons coordinate to form a whole." --The Japan Times

"This collection of short stories and poems about Japanese teens is weird and wonderful, studded with the unique color of Japanese teen pop culture, as well as the impact of defining events from the twenty-first century to the present: Pearl Harbor, Hiroshima, the tsunami, earthquake and nuclear disaster . . . . There's something fabulously specific about the pop culture references that can make reading Tomo: Friendship through Fiction feel like a virtual tour of Japan." --Barnes and Noble Review

"These 36 unique, heartwarming tales allow readers to feel Japan and its culture, as well as identify with the characters and their experiences during the sensitive teen years and the struggle to belong and to mature. From historical times to modern day, from traditions to current pop culture, from countryside to big city, from the country of Japan to Japanese communities around the world, these stories can also connect English-language readers with the heart of Japan." --Chopsticks NY

"The teen protagonists are written with sympathy and intuition, and the stories are all executed with confidence. . . . this collection was divided into ones I liked, and ones I liked more." --Asian Review of Books

"This collection of stories leaves the reader with an amazing sense of hope for the future of Japan....This is not only a great book commemorating the spirit of the Tohoku people, it is a darn good read, and the English book I would recommend first to anyone who wants to dip their toes into Japanese literature." --Perogies & Gyoza

"There is plenty for adults to enjoy here, too." --JQ Magazine

"As the winds blow through the tales and understanding blossoms in the lives of teenage protagonists, a real live vision of hope, peace and renewal is formed which brings a full circle to the meaning of 'Friend'...In this ripe time for healing just before the one year anniversary of 3/11/2011, make a new friend--the book called Tomo." --Japan Visitor

Posted by HATBOOKS Author Holly Thompson at 8:00 AM 2 comments: 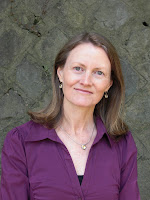 Holly Thompson (author of the foreword and editor of Tomo) earned an MA from the NYU creative writing program and is the author of fiction set in Japan: the novel Ash, the picture book The Wakame Gatherers, and the verse novel Orchards, which received the 2012 APALA Asian/Pacific American Award for Young Adult Literature. A longtime resident of Japan, she teaches creative and academic writing at Yokohama City University and is regional advisor of the Tokyo chapter of the Society of Children's Book Writers and Illustrators. Visit her website: www.hatbooks.com

Debbie Ridpath Ohi (author/illustrator of the Tomo story "Kodama") interviewed Holly Thompson for Debbie's Inkygirl.com website. See the full interview here; you can post a comment there for a chance to win a copy of the Tomo anthology.

Holly's message to Tohoku teens lies in the words at the end of the foreword to Tomo: Friendship Through Fiction:

"May the hard-hit communities of northern Japan find the strength to move forward. May the young people of Japan cultivate a spirit of compassion and play key roles in reviving Tohoku. Tomo 友 means "friend," and I am profoundly grateful to everyone who joins me in saying to the people of Tohoku: We are with you, we will help you, we will cheer you as you take your steps to recover."

Posted by HATBOOKS Author Holly Thompson at 6:00 PM No comments: