This summer Tomo: Friendship Through Fiction was featured in Wichita, Kansas.

This summer, the Wichita Eagle newspaper listed Tomo as one of the top-selling titles at Watermark Books and Cafe, a local independent bookstore. Watermark’s majority owner Sarah Bagby has spoken on behalf of indies to the New York Times, and Newbery Award-winning author Clare Vanderpool thanks the store in her latest title Navigating Early. 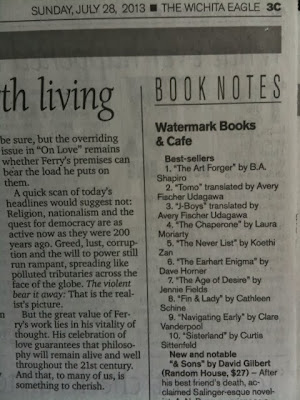 How did Tomo end up at Watermark?

I had the pleasure to speak there in mid-July about translating J-Boys, a novel by Tomo contributor Shogo Oketani, and “House of Trust,” the short story by Sachiko Kashiwaba that appears in Tomo. My Kansas-based family drummed up a terrific crowd of listeners, and Watermark boosted inventory and included Tomo in its media offerings. 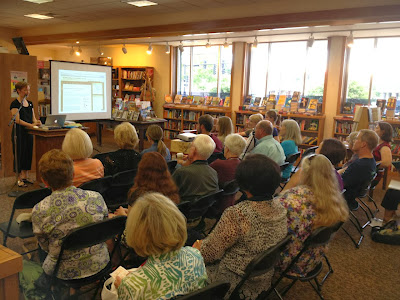 It was amazing to see Watermark support a talk on translation and an anthology focused on Japan. I am grateful also to Wichitans who took interest in Tomo, buying books to benefit teen survivors of the Great East Japan Earthquake and Tsunami. 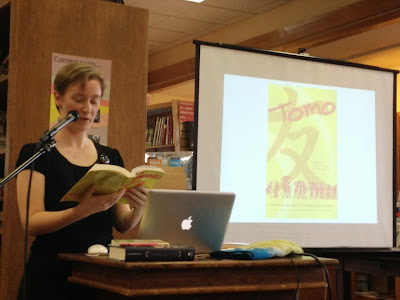 I plan to include Tomo in future talks at bookstores, libraries, conferences and schools and know other contributors will do likewise. What a terrific avenue it gives us to spread the word about Tohoku! Interested readers are everywhere.

So, do you have a story or photos to share about Tomo travels? Contact editor Holly Thompson: tomoanthology (at) gmail (dot) com. Thanks!

Posted by HATBOOKS Author Holly Thompson at 12:22 PM No comments:

The Asian Festival of Children's Content (AFCC) is a conference in Singapore with various tracks, workshops and seminars. This year, for the first time, a translation track was offered during the day of seminars, and the track of four seminars featured Tomo translator contributors Avery Fischer Udagawa and Alexander O. Smith, as well as editor Holly Thompson. In the individual talks and panel discussion, Tomo came up again and again--the nature of the project; the nitty-gritty aspects of translation; the search for and selection of stories; the correspondence between editor, translators and authors; the editing process, and publication and promotion.

Here is translator Avery Fischer Udagawa talking at AFCC about the Boston launch of Tomo, to which author Sachiko Kashiwaba and daughter wore kimono with the obi tied in the same way as depicted in the story. 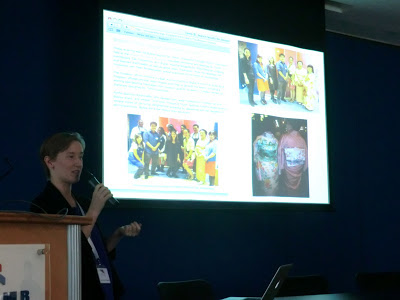 Avery spoke of sharing these photos with students during school visits in Japan and Thailand, thereby making a local event travel the world.

And it's been so nice to see Tomo: Friendship Through Fiction being snapped up by attendees at the conference. Here are a few excited fans of the book, which is still helping to provide longterm support for teens in Tohoku. Thank you!

Posted by HATBOOKS Author Holly Thompson at 8:38 PM No comments:

Tomo in the World Literature Classroom

Tomo: Friendship Through Fiction is making its way into school libraries and classrooms and is being adopted as a textbook in some schools. I was happy to hear from teacher Lee Karpa from Hamilton-Wenham Regional High School in Massachusetts about how Tomo was used in a new World Lit elective. Here are Lee's words:
----


"Recently our English Department embarked on a new endeavor, offering a World Literature elective course in addition to the general four-year required English classes. The one-semester elective was launched in September of 2011 and was successful enough for the course to be offered again in the 2012-2013 school year.

"In this Contemporary World Literature elective, students are asked to read and write beyond the rather challenging demands of their required English classes. I began the year with the study of Japan, its literature, film, and culture. We began reading selections from Tomo which gave students manageable reading chunks. Not only were the selections accessible, they were enjoyed by all of the students. I began by assigning a few short stories to the entire class, then having students choose a selection which was later shared with the rest of the students. Based on the students’ reviews, each student chose another story to read. Finally, students who had read the same story met to discuss. In this way, the majority of the stories were covered.

"The Tomo stories in verse were shared primarily in class, with students reading the poetry aloud, followed by discussion. A couple of the longer poems were read by each student reading one stanza. The students loved this manner of reading poetry, feeling that the verse came alive and became approachable.

"Tomo was the perfect vehicle for beginning a World Literature class."
__

Thank you, Lee, and thank you to all schools, book groups and classrooms that use Tomo. Thank you for being friends to Tohoku through fiction.
Posted by HATBOOKS Author Holly Thompson at 10:03 PM No comments:

The Young Adult Review Network (YARN) shared a sneak peak at Tomo: Friendship Through Fiction last year that featured the Tomo story "Love Right on the Yesterday" by Wendy Nelson Tokunaga, and now YARN has developed a lesson plan to go with this story. 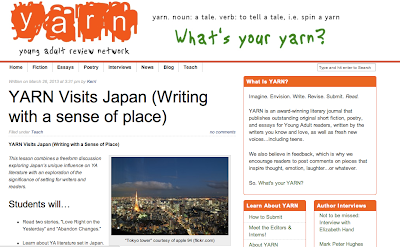 Have a look at this YARN post which features two Japan-set stories and a lesson plan and assignments to accompany them. The lesson focuses on writing with a sense of place. Thank you to YARN for this excellent teaching post.

Also, check out the Reader's Guide to Tomo: Friendship Through Fiction here which has discussion questions and writing prompts for the entire Tomo anthology as well as for each individual story. Proceeds from Tomo: Friendship Through Fiction go to organizations that benefit teens in Tohoku affected by the 2011 Great East Japan Earthquake and Tsunami. 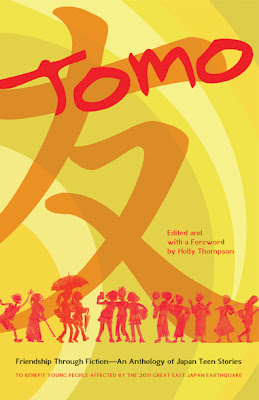 Posted by HATBOOKS Author Holly Thompson at 1:30 AM No comments:

This month Part 1 of Marji Napper's short story "The Lost Property Office" which is published in Tomo: Friendship Through Fiction appears in Cricket Magazine, with full color illustrations. Also featured in this issue, "a Japanese delight" according to the editors, are other stories stories related to Japan, so if you can get your hands on a copy of the magazine do have a look. 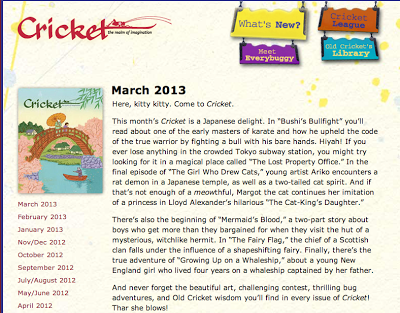 For an interview with the story's author Marji Napper in the Contributors and Interviews section of this Tomo Blog, click here. And for discussion questions relating to "The Lost Property Office, download the free Tomo: Friendship Through Fiction Reader's Guide.
Posted by HATBOOKS Author Holly Thompson at 1:25 PM No comments: